The UBC Geophysical Inversion Facility carries out research on geophysical inverse theory, modelling, and applications. Projects involve student, industry, and academic interaction and research. Highlights of some of these projects can be found below. Also, the UBC-GIF UneXploded Ordnance (UXO) and Landmine Detection Group focuses on the detection and discrimination of UXOs using magnetic and electromagnetic methods, and the study of the effects of magnetic soils on landmine and UXO detection. 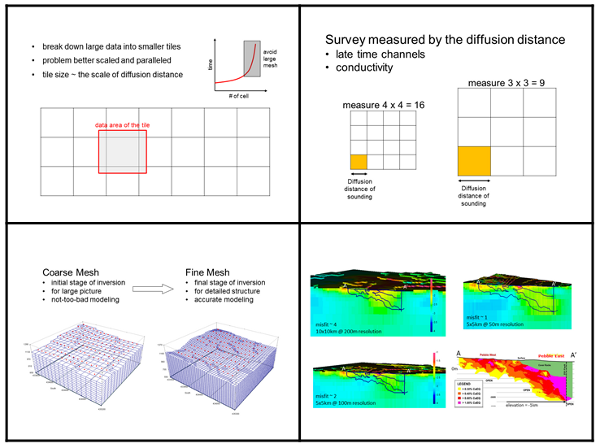 Three-dimensional inversion of large airborne time domain EM data, which is traditionally considered impractical, can be rapidly carried out by using a thoughtful workflow.  In our 3D inversion algorithm, the number of cells in the mesh and the number of soundings are two factors that slow down the inversion.  Therefore, we develop a strategy of adaptive mesh and sounding refinement to minimize the number of cells and the number of soundings required by the inversion.  At the beginning, a coarse mesh and a few soundings are used to quickly build up a large-scale model.  Then the mesh is refined and more soundings are added based upon their data misfit.  At each iteration of the inversion, a certain number of soundings are randomly selected, and we change the data selection from iteration to iteration.  This allows us to down-sample the field data without much loss of information.  Once the large-scale model is obtained, we carry out some tile inversions that focus on smaller areas with a locally refined mesh to better resolve the small-scale features.  The workflow is demonstrated by a synthetic example with 2121 transmitters that takes about 10 hours to be solved compared to about 150 hours if we had started the inversion on a fine mesh and used all of the transmitters.  The methodology of speeding up the inversion by adaptive mesh and data refinement can also be applied to other EM surveys. 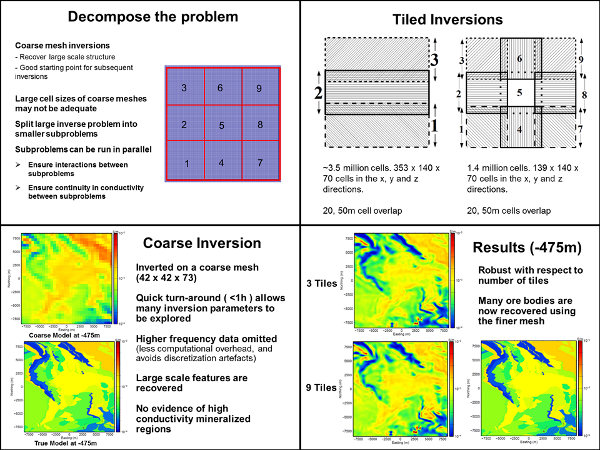 As the number of near surface deposits decreases, it becomes increasingly important to develop geophysical techniques to image at depth. Because of the penetration advantage of plane wave natural sources, these techniques are ideal to answer questions about the deep subsurface to the earth. A ZTEM survey is an airborne electromagnetic survey which records the vertical magnetic field that result from natural sources. The data are transfer functions that relate the local vertical field to orthogonal horizontal fields measured at a reference station on the ground. While the airborne nature of the survey means that large survey areas can be surveyed quickly and economically, the high number of cells required to discretize the entire survey area at reasonable resolution can make the computational costs of inverting the entire data set all at once prohibitively expensive. Here we present a workflow methodology that can be used to invert large natural source surveys by decomposing the large inverse problem into smaller more manageable problems before combining the tiles into a final inversion result. We use the procedure to invert synthetic ZTEM data for the Noranda mining camp as well as a field data example. Both of these data sets were far too large to solve on a single grid even with multiple processors at our disposal.